Report on fishing competition on May 12th 2019

A record of six boats and 11 fishermen managed to get out for the second competition of the year for the biggest Smoothound .

The weather was glorious with strong spring sunshine for most of the day, with a breeze causing a bit of a chop when the tide changed to East later. Fish caught were a mixture of rays, dogfish and Smoothound, with the biggest one caught off the brambles by Dan on Kaikoura.

At the weigh in about 6 pm,  the winning smoohound  of 12lb was caught by Dan, followed by a crew member of Leggy  of 8lb and third place was Steve with  6 lb.

First, second and third prizes were awarded at the clubhouse, accompanied by a beer. East Cowes Tackle shop kindly donated a voucher of £20 for the second prize.

The entrance fee for this competition (£50) was kindly donated to Barneys wife , Pam who will put it towards his head stone. Barney, who passed away last year, was the previous owner of a popular tackle shop in West Cowes who members of East Cowes fishing community fondly remember.

The next trip will be round the Island extravaganza between June 28th and July 1st (see flyer in gate notice board). 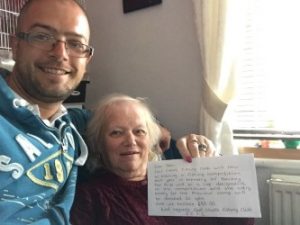 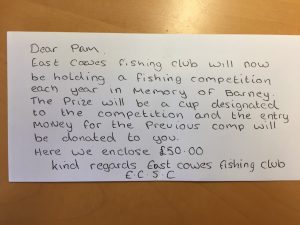