What a fantastic turn out for the first competition of the year after lockdown.  Fishing was good with six boats; Richard in Puffin with Dan; Dave Abrook in his boat; Mike in Kaikoura with Paul H; Herbie in his boat, Sam in his boat with crew, Brian in his boat. The weather was a brilliant sunny day and boats headed in different directions around the Solent; Ryde middle, Bramble bank, Norris, Kings Quay and Peel Bank.

Fishing started at 8 a.m., a bit slow to start with, but improved as the tide slackened. Kaikoura was greeted by a seal off Kings Quay, but didn’t help with our fishing!

The “weigh in” was at 4 pm, where most fish were returned and it was a matter of trust. Dave Abrook was a clear winner with a thornback of 11lb 7 oz. He also caught a 10lb undulate and a 7llb thornback. He gained 5 points* towards the cup at the end of the year. Other fishermen with rays were Paul H with a Thornback of 7lb 8 0z (4 points); Herbie with a thornback of 5lb (3 points); Brian with a spotted ray of 3lb 4 0z (2 points) and Dan with a spotted ray of 3lb (1 point).

Other fish caught were plenty of dogfish and it was good to see some early smooth hounds caught. 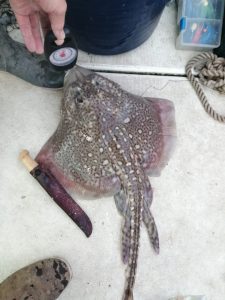 *Number of points are given depending on number of fishermen who have caught the target species, e.g. 5 people , 5 points for heaviest fish and 4 for next heaviest etc.